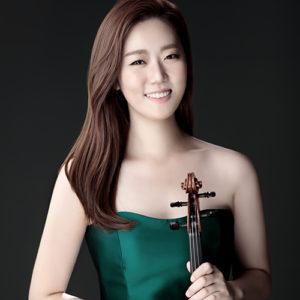 Violist Kyuri Kim was born in Seoul, South Korea in 1992. She started to play the viola at age 11 and entered the Yewon Music School. At age 16, she made her orchestral debut at the Seoul Arts Center Concert Hall and eventually went on to study with Eunsik Choi at the Seoul National University. In 2012, she was awarded the first prize at the Dongailbo Music Competition hosted by a well-known Korean broadcasting company and, since then, has captured top prizes at numerous other competitions such as the first prize at the 2015 Szymon Goldberg Competition, 2016 International Johannes Brahms Competition, and 2016 Anton Rubinstein Competition. Ms. Kim has performed in many concerts throughout her musical career, including the Bartók Viola Concerto with the Bucheon Philharmonic and the JVC Orchestra. Since 2015, she has been studying with Tabea Zimmermann at the Hochschule für Musik Hanns Eisler Berlin. She plans to participate in the 2018 ARD Competition, and looks forward to competing in the 2018 Primrose International Viola Competition.