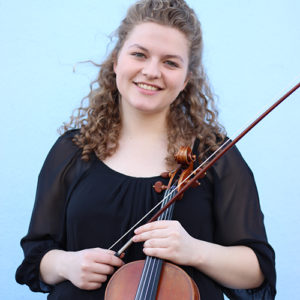 Johanna Nowik, 21, hails from North Plainfield, New Jersey, and began her viola studies in 2011 with Michael Stewart and Brett Deubner. In 2017 she was awarded first place in the strings division at the Pasadena Showcase House Instrumental Competition and was a bronze medalist in the 2017 Osaka International Chamber Music Competition and Festa as violist of the Viano String Quartet. Ms. Nowik was also the Grand Prize recipient of both the Wharton Music Center Young Artists Competition in 2014 and the New Jersey Youth Symphony Concerto Competition in 2015. In addition to her solo and chamber music experiences, Ms. Nowik has served as the principal violist of the Colburn Orchestra, YMF Debut Chamber Orchestra, New Jersey Youth Symphony, and New Jersey All-State Orchestra. Ms. Nowik currently studies with Paul Coletti at the Colburn Conservatory of Music, and will return as a third-year fellow this summer to the Tanglewood Music Center.